In 2009, Yanmar lowered the maximum oil level to the low mark on the dipstick available at the time. As the SD40/SD50 heats up during operation, pressure builds up in the gearbox. This pressure could escape through the drive shaft seal (to the engine). Gear oil can escape as well. During the subsequent cooling, a negative pressure could arise in the SD40/ SD50, which could suck in water at the propeller sealing ring. Due to the change in the oil level and the associated increase in the ratio of air to oil level in the SD40/SD50, the pressure conditions are more favorable and the risk of water-in-oil leakage is lower. 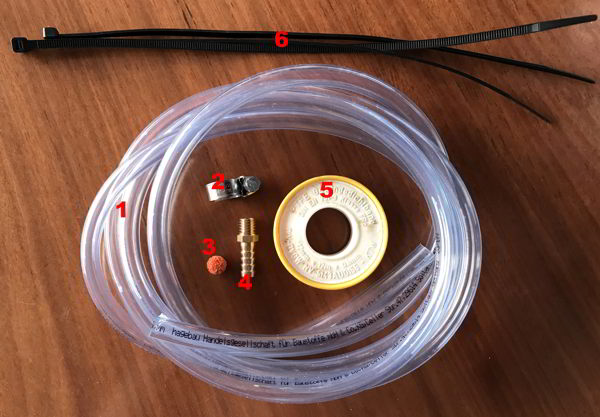 Parts 3 and 4 may be difficult to obtain individually.

Simply load the order list, tick the parts you want and send me the file. (Info: The file can be edited directly in Acrobat Reader, but not in Windows Edge.)

Or write me an email

Parts 3 and 4 can be obtained from me (18€ incl. shipping in Germany, abroad on request). Just write an email. You can get everything else at the hardware store. 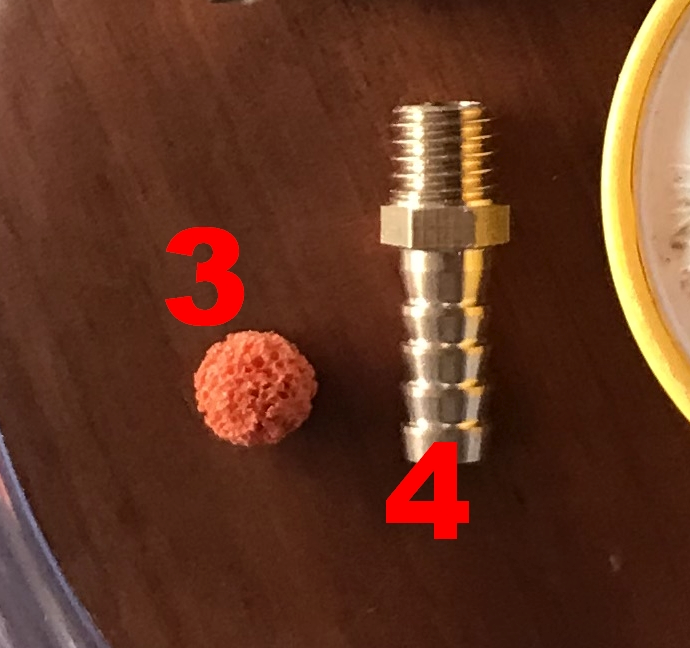 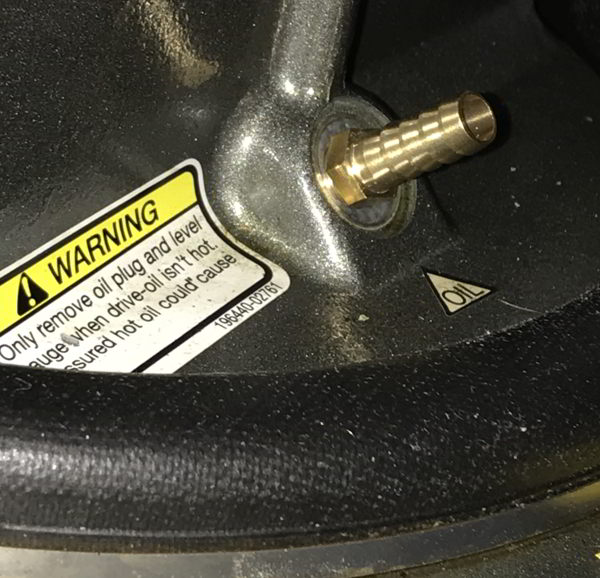 Another tip. The Saildrive manual describes the oil change
in the water in chapter 6.2.1. described. The hose nozzle can also be screwed into the oil outlet. 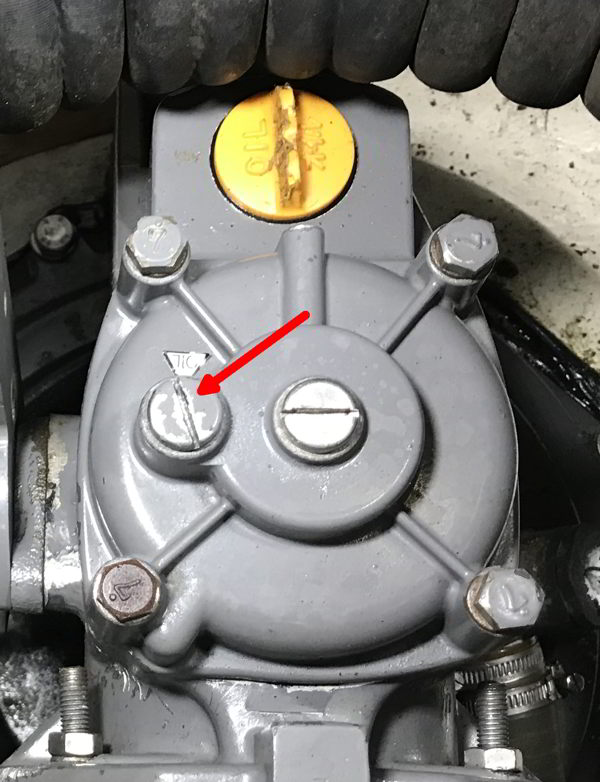 Left: The marked screw is removed from the upper clutch cover.
Right: The 8mm hose nozzle is screwed in and sealed with some Teflon tape

Left: The 8mm hose is put on the hose nozzle and fastened with the hose clamp. Clear soft PVC hose is mostly oil proof and you can see if oil is leaking out. A few cm of oil in the line is not a problem.

Center: The hose with the cable ties routed up in a wide arc on other parts in the engine compartment.

Right: At the end of the hose, a small foam rubber ball is inserted into the hose to keep dust and insects out.

When heated, the pressure can now escape. The hose can even compensate for small amounts of oil. 1m hose with 8mm inner diameter takes 50ml oil.

Do you change the oil yourself as part of the annual maintenance and follow the instructions in your operating manual?

Another note: the new long dipstick has a black dot on the cap.

Reason from Yanmar: Due to the heating up during operation of the SD50, pressure builds up in the transmission. This pressure could escape through the drive shaft seal (to the engine). Oil can escape with it. During the subsequent cooling, a negative pressure could arise in the SD50, which could suck in water at the propeller sealing ring.

By increasing the ratio of air to oil level in the SD50, the pressure conditions are more favorable and the risk of water leakage is lower. With the conversion instructions shown above and the service kit, you can set the oil level in the SD50 back to MAX and there will no longer be an oil leak due to a pressure build-up in the sail drive.

A word about gear oil

The SD50 operating instructions refer to Mercury Quicksilver High Performance Gear Oil. As far as is known, this oil is not only attributed an exorbitant price, but also very good water-binding properties. I can confirm both.

If you always change the Simmerrings on the propeller of the Saildrive together with the underwater paint, so every 2-3 years, you can do without these properties and use SAE 90 GL3 or GL4 gear oil instead. This costs only 10% - 15% of the Quicksilver oil price and is perfectly adequate for the loads in the sail drive.

Never use GL4+ or GL5 or even higher alloyed oils. Not only are these more expensive, but they are definitely not good for the cone clutch.

And now for the technicians among the sailors:

An API GL4 lubricant contains additives specifically for manual transmissions. Manual transmissions contain non-ferrous metal (synchronizer rings). The friction of a GL4 oil must not be too low, otherwise the synchronizer ring will slip and shifting will become impossible. If the friction is too high, the shifting becomes notchy and scratches. The cone in the SD50 clutch is made of non-ferrous metal. Too little friction would cause the clutch to slip easily.

Also do not use GL4+ or GL4/5. This is thin like GL5 and doesn't contain as harsh additives.

An API GL5 lubricant contains special additives for highly stressed gears, such as E.g. hypoid gear. These gears have curved teeth. In addition to some advantages, this type of gearing has the disadvantage that the surfaces not only roll off each other, but also slide a little. This places increased demands on the material and requires the oil to have high lubricity. The additives contain sulphur, which in turn attacks non-ferrous metals.

In gear or in neutral when sailing?

The wildest reasons why the gear should be engaged or the gearbox should run in neutral are circulating on the internet. In certain cases I agree to the Yanmar instruction. In the case of a fixed-pitch propeller, the gear must run in neutral. With a folding propeller, it is necessary to check whether a folded propeller transmits vibrations to the gear coupling.

Reason: If the gear is engaged while sailing, the water flows around the ship's propeller in a turbulent manner and generates vibrations. The vibrations are transmitted to the clutch cone, which sits in the clutch bell. These vibrations create small movements that polish the clutch bell and cause the clutch to lose engagement. The result is a slipping clutch.

Fake argument: "Not properly lubricated". It is claimed on the internet that the sail drive would not be properly lubricated if it were to run in the neutral position while sailing. In the user manual of the Saildrive SD50 in chapter 2 "Technical specification" under lubrication system "Oil bath type" is mentioned. With this type, all moving parts are always surrounded by oil. A pump is not necessary. So this argument is wrong.

Fake argument: "High wear". What is meant to wear out when the water flow drives the propeller and gear up to the clutch? The force is far too low to cause wear.

Comments, inquiries and hints via mail are always welcome.